In spring, redwing blackbirds are the first back,

raucous clouds in the trees,

in waterfalls of sound.

When the tractor chugs into the field in June,

mowing the alfalfa their nests hang on,

The sickle blade cuts down the nest;

into the grass. The hovering pair flies away.

I walk through willows where more nests hang:

a male hunches his shoulders and hisses,

I walk across a field after mowing blackbird nests;

that grinding sound just behind my head

is a male blackbird flying within an inch,

I sit in the truck drinking coffee,

A hawk bursts from the cottonwood tops; two

blackbirds dart in above him, strike, screech.

He ducks, tries to slash them with his claws.

In relays, from territory to territory,

the blackbirds drive him toward the next field.

Two more rise to meet him.

A Department of Agriculture pamphlet

Birds digesting it react with "distress symptoms and calls."

It may not be used on crops intended for human food.

Blackbirds may be killed when "committing

or about to commit serious damage to agricultural crops."

I see a newspaper story on a man who

eats blackbirds; they taste, he says,

"you have to serve blackbirds with martinis." 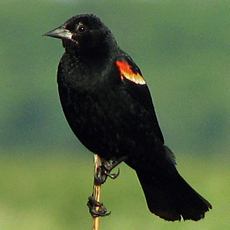 Poet-rancher Linda Hasselstrom has observed well the birds who share her western South Dakota pasture land. The birder/naturalist venturing too close to a redwing's nest knows that a painful peck on the head from a parent bird may well be expected. The poem's several sections on the species' aggressive protectionist nature eventually give way to more human concerns, including the irony of the government pamphlet's contradictory "suggestions" in section VII and the final punch-line hilarity of Section 8, on blackbirds' culinary possibilities. (The man's—and poet's?—implication that one knows what a Mourning Dove tastes like is perhaps sad enough in itself.)

Book: Caught By One Wing