Above the dike, early sun divides

the opposite bank into light and dark,

on stilt-legs in the shallows,

her bill as if a dagger poised.

There are theories, yet no one for certain knows

how the first birds began flight—gliding from a tree

or flapping off the ground—to escape or to eat.

All winter, walking to this creek,

I have seen her standing in the unfrozen stream,

A drift of snow lies protected on the steep,

no evidence of snow or ice anywhere,

plant—animal—earth in a state of grace.

Later, she will fold her long neck, take flight without me, 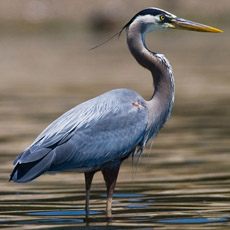 Among Great Plains birds, this large heron strikes the viewer as perhaps the most "archaic" creature of them all. Its long neck curved into an "s" to better perform its apparently awkward flight, its ungainly legs trailing behind, the bird seems an avatar from a previous geological era—which (like the crane) it is. Nebraska poet Twyla Hansen captures this truth wonderfully in this poem, as the heron "on ancient wings" both evokes an earlier and much warmer age and climate, when scales became feathers, and a Midwestern winter scene where this bird, marvelously, still survives, "gleaning" and "reaping."