from My Life on the Plains

But here again is furnished what some reasoners would affirm is evidence of the eternal fitness of things. In most localities where these [buffalo] flies are found in troublesome numbers, there are also found flocks of starlings, a species of blackbird; these, more, I presume, to obtain a livelihood than to become the defender of the helpless, perch themselves upon the backs of the animals, when woe betide the hapless gadfly who ventures near, only to become a choice morsel for the starling. In this way I have seen our herds of cavalry horses grazing undisturbed, each horse of the many hundreds having perched upon his back from one to dozens of starlings, standing guard over him while he grazed. 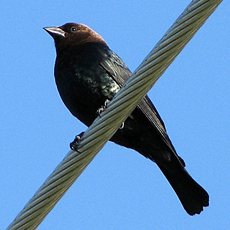 This avian interlude is part of Custer's introductory chapter of his Life, in which the Great Plains, or "Great American Desert" (3), is described in some earnest, as geographical backdrop to the grand historical events to follow. (Of course, Custer never got to record his adventures at the Little Big Horn [1876].) Besides the attempt at wit with "defender of the helpless," the passage is of interest not only for its early description of characteristic cowbird behavior, but for its typical Euro-American imposition of Old World ornithology upon New World birds. Yes, the Brown-headed Cowbird is a member of the American family of "blackbirds" (Icteridae), but the "starling" is not. Indeed, the European Starling wasn't introduced to the Americas until 1890, by a fellow who wanted to introduce all of the birds mentioned in Shakespeare to the U.S.

Book: My Life on the Plains