from A Cycle of the West

But yonder, with the crow

and kiote to applaud his pomp of woe,

The last great Sioux rode down to his defeat.

How all the pent-up music of the year

Surged northward there the way it used to do!

In vain the catbird scolded at the Sioux;

The timid pewee queried them in vain;

Nor heed the high geese calling them to come.

Where ecstasy of sap and thrill of wing

Made shift to flaunt some color or to sing

The birth of joy, they toiled a weary way.

And giddy April sobered into May

Before they topped the summit looking down

Upon the valley of the soldier's town

True to an empty ritual of faith

The geese came chanting as they used to do

When there was wonder yet; when, blue on blue,

The world was wider than a day in June,

And twice the northbound bison lost the moon

Trailing the summer up the Sioux domain.

What myriads now would hear the whooping crane

And join the green migration?

Among the public cottonwoods and oaks

The shrill jays coupled and the catbird screamed,

Delirious with the dream the old Earth dreamed

of ancient nuptials, ecstasies that were.

And every morning the deluded lark

Sang hallelujah to a widowed world. 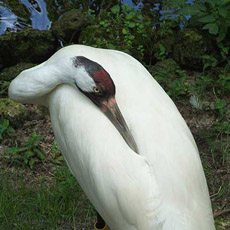 In the two "Indian" books of the Cycle, The Song of the Indian Wars and The Song of the Messiah, Nebraskan poet laureate Neihardt writes of the deaths of Crazy Horse and Sitting Bull, of the Ghost Dance and Wounded Knee, with a great deal of power and empathy. The two passages above involve moments in which the Lakota culture was at its nadir, and their emotional impact derives from the ironic juxtaposition of a despairing people and a natural world that would get on with the annual rebirth of spring but must be infected with the depressed human mood via the sympathetic fallacy. . . . Unless Neihardt is confusing the Whooping Crane with the Sandhill, his allusions here are already nostalgic invocations of a time past, since the former species was already rare and endangered by the early 20th century. Indeed, it's hard not to find parallels in the species' near-extinction and the fate of the Lakota, a "doomed" people for whom Neihardt insists upon writing an elegy, both in the Cycle and in Black Elk Speaks. Thankfully, both this bird and this tribal culture are making comebacks.

Book: A Cycle of the West