from The Song of the Indian Wars

How good is rain when from a sunlit scarp

For winds to play on, and the new green swirls

Beneath the dancing feet of April girls,

And thunder-claps applaud the meadow lark? 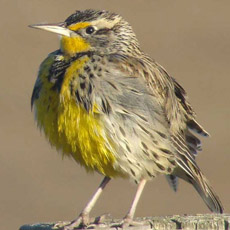 Written in heroic couplets, rife with long, verbose Homeric similes, Neihardt's epic to his Great Plains homeland often reads like a Midwesterner's translation of Homer. Here the old-fashioned (for the Modernist 1920's) poeticisms even include an explicit return to ancient Greece (the "titan"), and by the time the reader gets to "April girls," it's difficult not to picture—nymphs? To get to my ultimate point: by the time we arrive, with great "applause," to the real—the plains—bird, it's quite an odd leap to have to make, for this reader, at least: if not laughable, the image has been rendered an incongruity and anachronism.

Book: A Cycle of the West