in an effort to be too much of itself,

mocks more than it can handle,

heron and warbler and shrike,

its throat encumbered with sound,

until arriving at the char char char

of its own dark mind

all the way to the south-bank

current in the river,

where the water, pipeline

to something more than itself,

carries them (each fleck

of white and of grey

at the end of a slanting sun

so conspicuous, in this other flight

out and down to where the bridge

rides high on the crest of its

shadow before going under. 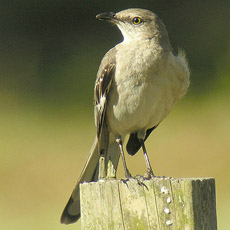 While apparently expanding northward (as far as southern Nebraska), the mockingbird is still less familiar to denizens of the northern Great Plains than its close relatives, the Gray Catbird and Brown Thrasher. (And so it is one of the best reasons to visit the southern Great Plains, by the way.) The current Nebraska Poet Laureate expresses a good familiarity with it, nonetheless, in a poem that presents the bird's extroverted, egoistical mimic nature well. The notion that, after imitating so many other species' calls, it also vocalizes its "own dark mind" is a fascinating angle, and this self-mocking authentic call is then metaphorically transformed through the rest of the poem: it becomes the bird's very body (and sheer egoism) exploding, the gray and white feathers suffusing the environment, across and down the river, to the horizon and setting sun.