The eye has it, and just as often, the ear:

I sit, becoming a drowsy stone in the slow dusk,

when great wings tilt low over contours of grass,

pounce merciless with great hooks into something small.

I have stumbled into its territory, blind in this vanishing light.

Around me, voices riffle wild to the whitewash moon,

to the flurry of planets now hobbled overhead. Harrier,

from the old English hergian, to harrass by hostile attacks.

Is that the beauty of this broken world, then, to grapple with,

to understand? As I think I do; as if this is my own domain. 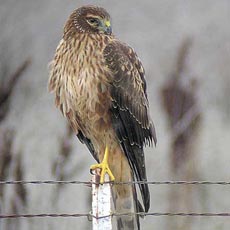 Older birders grew up knowing this bird as the "Marsh Hawk," a common Midwestern roadside sight, with its distinctive white rump and low soaring on angled wings over the fields. But the return of the old name "harrier" and its entymology are a boon to the poet, who can thus philosophize on the human condition—a "broken world" with its own hunter-and-hunted grappling for understanding. But maybe this world is really just as strange as the raptor's dusk habitat of "vanishing light," for the poet can only end with an "I think I do" and an "as if"—still uncertain, and ultimately "blind."